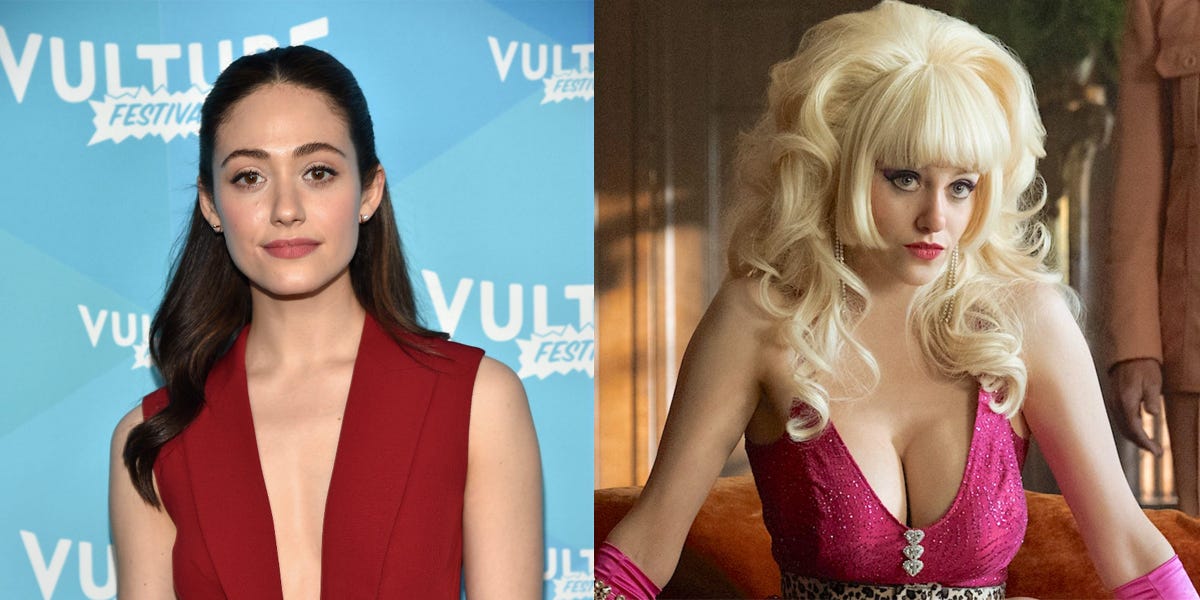 Actress Emmy Rossum stars in a new Peacock TV series called ‘Angelyne’, named after a woman who rose to fame in Los Angeles for being a ‘billboard queen’. In order to become the icon of the 80s, Rossum spent up to five hours in the makeup chair having heavy breast forms applied to her chest.

In a new Hollywood Reporter profile on the star, journalist Mikey O’Connell writes that “Rossum had blisters from the fake breasts and suffered from tear duct problems from wearing two pairs of contact lenses and oppressive eye makeup during filming.”

Rossum, who has been the show’s “champion” from the start, showed up to a key business meeting with NBC Universal in a full suit with fake three-pounder tits and all.

“The character’s physique was tough,” Rossum told The Hollywood Reporter. “The body is heavy, but it should feel light and effervescent.”

“When I say there were times when I didn’t recognize her because she was lost in that person, I really mean it,” Esmail told The Hollywood Reporter. “This is my wife I’m talking about. It’s a bit strange.”

Angelyne, born Ronia Tamar Goldberg in 1950, became a recognizable part of Los Angeles life when she paid for a series of billboards to be erected in the city of California in 1984. The billboards showed Angelyne posing in lingerie with her name spelled out in hot pink lettering.

She was known for driving her hot pink Corvette around town and has dabbled in everything from acting to singing to racing in California Governor’s races more than once. In 2017, The Hollywood Reporter published a story revealing Angelyne’s true identity, describing her as “the locally raised daughter of Holocaust survivors, a Jewess who found refuge in the shiksa drag.”

Rossum became interested in telling Angelyne’s story in a limited series after reading the 2017 article, and five years later her goal was achieved.