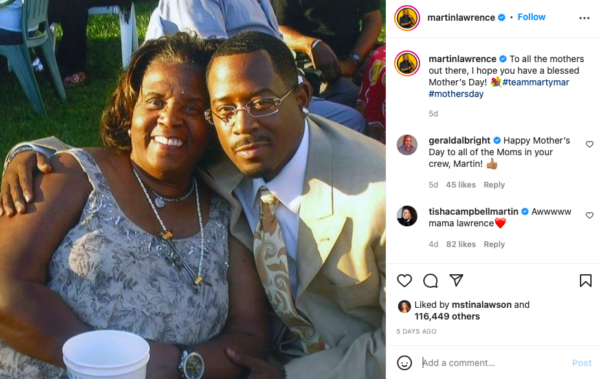 The actor, who pays tribute to his mother every year with holiday and birthday uploads by sharing what appears to be his favorite photo of the couple, dedicated an Instagram post to her in honor of Mother’s Day.

In the upload shared on May 8, Martin posted a throwback image of the duo as they attended an undisclosed event. Alongside the photo in the caption, the 57-year-old sent his best wishes to all mothers.

He wrote: “To all the mothers, I hope you have a blessed mother’s day! #teammartymar #mothersday. As fans watched the post, although many returned similar sentiments to Martin, several people expressed how amazed they were at the striking resemblance of mother and son.

“The resemblance is epic.”

“What a treat. Martin, you look just like your mom. Mom is so beautiful. Thanks for sharing.”

“Happy Mother’s Day to your mom. You look just like her.

Along with the comparison remarks, other social media users praised Martin’s late mother for not only giving birth to a legendary talent, but also a great person. One wrote: “So she is responsible for all this greatness!?? Wow awww god bless her!!”

Another said: ‘The woman who gave birth to a whole new TV movement, Happy Mother’s Day.’ While mentioning that his mum is happily watching over Martin, a third person posted, “I’m sure your mum is happy up there watching over you!! flowers for her.